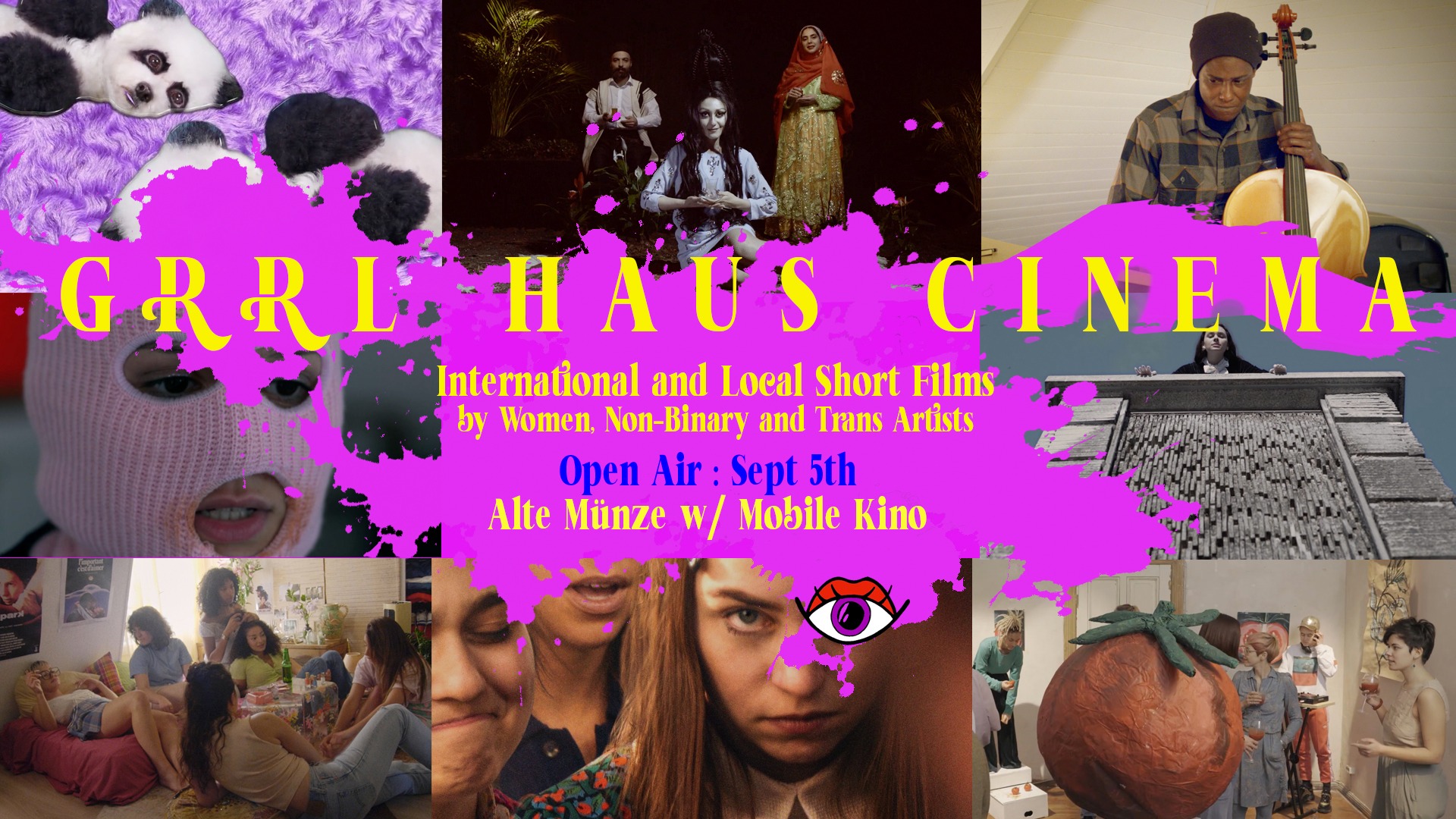 Mobile Kino is excited to once again host a great selection of Short Films by GRRL HAUS CINEMA.

GRRL HAUS CINEMA is an ongoing program of short films and video art made by women, non-binary, trans and genderqueer artists. A mix of local, national, and international artists present work from a variety of disciplines: narrative, documentary, experimental, and conceptual. With an emphasis on low budget and DIY, GRRL HAUS is a space for underrepresented voices in media arts.

/// Please be aware that this GRRL HAUS screening is intended for adults and has mature content. ///

Roya – Rosh Zeeba
Roya (“Dream, Vision in farsi”) is an Iranian dancer and the main character of this film. She describes herself as “partly a sample consisting of different layers” and gives an intimate speech to the audience. She questions the exoticizing gaze of western viewers. A mysterious snail that is connected to Roya opens up a story within the story by telling us about her roadtrip from Isfahan to Sari (Iran). Meanwhile Roya’s lover, a fabulous alienesque being, lands on earth to build a lush, revolutionary garden of pleasure.

Forever Yours – Maja Zagórska
Is grooming a dog into a shape of a butterfly an abuse of power ? „Forever Yours“ is a final product of an artistic research on creative pet grooming competitions. The experimental animation explores themes of commodification, consumer cycles, advertising culture and cuteness.

No Man’s Land – Kristen Buckels and Lacey Jeka
No Man’s Land is a dark-comedy that follows a group of five brainwashed women that are left behind, leading one of them to question her worldview.
*TW – this film contains content about suicide*

Wolf Tone – Lauren Cook, Nate Pancione
Lisa reaches out to Jae hoping to get it right this time. Jae can’t just forgive and forget after many years of Lisa not accepting Jae’s gender identity. Is there a way forward? Should there be?

Doma – Laura Gönczy
We follow Doma, a 77 years old woman, from the moment she walks into a tomato exhibition. Her fascination is communicative, especially the one she feels for the person performing on a pedestal, smashing and squeezing real tomatoes. In a world where she and her body are not offered much space nor attention, Doma is confronted this time with a generation of unfamiliar codes. The film tells the story of a special moment for her, one in which she will earn her place in the spotlight.

Sweet Potato – Evie Ayres-Townshend
Sweet Potato is a story of discovering how we want to be loved. Emilia’s relationship with Tarron is fiery and hot, but is it quite right? When her female friend, Sam, opens Emilia’s eyes to acts of love and tentativeness she’s not experienced before, what she wants from relationships is called into question. Fragments of memory are intertwined and battle one another as Emilia enters an inner conflict that sings of the early twenties experience and a young woman’s first steps of queer discovery.

Feminist Tribunal – Anna Schubert
In FEMINIST TRIBUNAL the possibility of an alternative underground justice system which serves exclusively the rights of womxn explored in complex and dramatic interactions between the 1 judge, the defendant and two activist employees. You are thrown into a dark mixture of trauma, dream, time, revenge, forgiveness and healing which leaves you with a (helpless) nothing and a (creative) everything at the same time.
*film contains violent content*

Aquaria – Julia Obst
‘Aquaria’ is an experimental fantasy short that follows a woman’s struggle with her identity – she is blend of human and fish. This hybrid existence is something the director can personally identify with because she’s half Brazilian and half German. The question of belonging and cultural identity has occupied her mind for a long time. Based on the fairy tale “The Pond Aquarius”, the film is entirely without dialogue and constructed by various metaphorical shots.